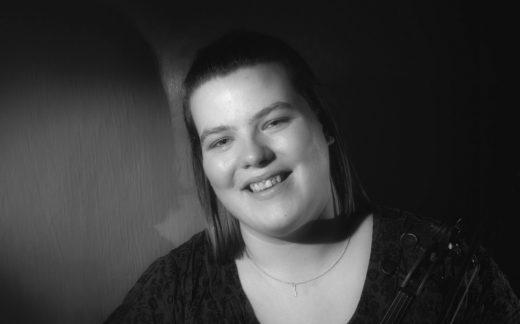 Shona started playing violin at the age of 8 at school and later became enthralled with Scottish music when her sister started learning the accordion.

Shona was brought up with Scottish music around her and the family would always have Take The Floor on BBC Radio Scotland on a Saturday night playing.

One band in particular, that was a favourite in the household, was John Ellis & His Highland Dance Band. This band has been a huge influence on the style that Susan and Shona play in their own band.

Shona has received lessons from several different teachers including Jenna Reid from Shetland, Gill Simpson from Dundee and more recently Douglas Lawrence from Aberdeenshire but now based in Glasgow.

Shona has won numerous competitions, including the RSCDS Class at the NAAFC Competitions that were held in March last year where she also won the Overall Senior Fiddle trophy. Shona also won the All Scotland Senior Slow class in Perth in 2018 as well.  Prior to that Shona has won slow air, championships and march, strathspey & reel competitions all over Scotland including Perth, Banchory and Oban.

Shona has been involved with the RSCDS Summer School for the last 6 years, firstly as a tutor on the musicians course along side, then, Musical Director, George Meikle and as a class musician for 6 years. Shona has also played for Winter School in Pitlochry on 3 occasions as well.

Along with her sister, Susan, Shona attended the Na Trad Awards — the Scottish Musics version on the “Oscars” where they walked away with the title of Scottish Dance Band of the Year 2018.